The Almeria Western Film Festival presents the contents of its 9th edition, from October 10th to the 13th in Tabernas 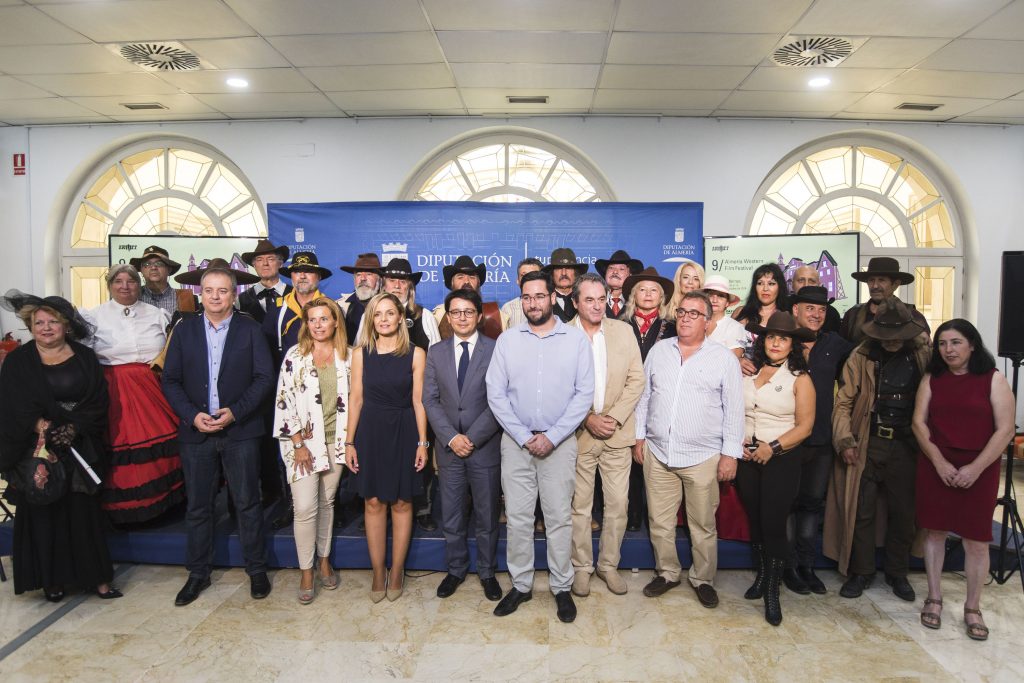 The actor Georges Hilton, the director Alex Cox, the production company Film Service, and the location manager from Almeria Joaquín “Tate” Fernández, will be the honorees of this edition

Almeria, September 30th 2019-. Today, The Almeria Western Film Festival (AWFF), taking place from October 10th to the 13th in Tabernas and the western villages Oasys Mini Hollywood and Fort Bravo Texas Hollywood, has presented the contents of its 9th edition. The Official Section includes eight feature films ‒five of which will be released for the first time in Europe‒ and thirteen short films originating from countries like Brazil, Argentina, Mexico, Colombia, United States, Canada, United Kingdom, France and Spain. Besides, the Festival will include “Panorama”, a special section that will include two works released for the first time in Spain and will be complemented by the Retrospective Section, literary works presentations, concerts, exhibitions, and other playful activities that will be suitable for everyone and free admission until full capacity.

The County Council Offices in Almeria (Diputación de Almería) has been the location to present the 9th edition of the AWFF, which relied on the presence of the delegate of the Government of Andalucia in Almeria, Maribel Sánchez, the provincial deputy of Culture and Cinema in Almeria, Manuel Guzmán, the mayor of Tabernas, José Díaz, the director of communication of Senator Hotels & Resort, Marta Galdo, and the festival director, Eduardo Trías. In addition, representatives from the different entities that have collaborated with the festival were present, as well as professionals from the film industry and Western film enthusiasts.

“In the selection that we have done for the different sections, we can see the power of this genre, that far from being stale, it is constantly being developed and prospering, showing a perfect health at the present time. The traditional western ‒refined in staging and plot twists, but without losing its icons and characteristics‒ addapts to current cinema and neo-western, a subgenre that opens a universe of posibilities, whether temporary or spatial”, the director of the festival, Eduardo Trías, explained.

The Panel of Judges for the Official Feature Film Section is formed by the actress Cuca Escribano; the producer, director and scriptwriter Gonzalo Bendala; the director Emanuele Gerosa; and the cultural director and filmmaker Rafael Maluenda. In addition, the festival will include the participation of a professional panel of judges for the Official Short Film Section, the RTVA Prize, and the Film School category.

Nieves Gómez – Teacher in the University of Almeria and filmmaker.

The Official Short Film Section is composed of thirteen works of fiction and animation that will be valued by the panel of judges that will give the Prize to the Best Western Short Film and to the Best Neo-Western Short Film. For this edition, more than 1,200 registrations from countries of five continents have been received through Festhome, FilmFreeWay and Movibeta platforms, showing the interest generated by the festival and also its revitalisation in different places in the world.

“Panorama”, the special section that doesn’t take part in competition, includes three documentaries that will be released for the first time in Spain. “Sergio Leone, une Amérique de legend”, directed by Jean-François Giré (France, 2018) will show us the personality of this Italian director, from his childhood until his extraordinary career in the world of cinema. We will be able to see, for the first time, “For A Few Dollars More location”, the documentary video filmed by the British director Alex Cox about the locations of “For A Few Dollars More” (Sergio Leone, 1965).

In adittion, the director Daniel Camargo will attend the festival to release his work “George Hilton – The World Belongs to de Daring” (Italy, 2019), a documentary about Hilton’s story told through the testimonies of relatives, colleagues and himself. The Almeria Western Film Festival will award the Leone in Memoriam Prize to the actor George Hilton, from Uruguay, who was honored in the third edition of the festival and who became one of the most famous main characters in Western, thrillers and other genres. The film “Los profesionales del oro” (“The Ruthless Four”, Giorgio Capitani, Italy, 1968), in which Georges Hilton participated (1934-2019), and played some scenes in Tabernas.

The “Tabernas de Cine” Award of the 9th edition of the AWFF will be awarded to director, scriptwriter and actor Alex Cox, as the major of the town, Jose Díaz, has announced, and he has also explained that Cox is a lover of western and Tabernas, since for a few years he even had his residence in Tabernas. Therefore, the Special Retrospective Section will include the screening of “Straight to Hell” (Alex Cox, 1987), which was mostly filmed in Almeria.

The “Desierto de Tabernas! Award will be awarded to the production company Fresco Film Services for its contribution to the spreading of the Desert as a film cinema icon. “It is one of the most important production companies at national level and has collaborated in a lot of works filmed in Almería and Tabernas; such as “Terminator 6” (2019) or “Game of Thrones” (2016), as well as in a variety of commercials and other audiovisual productions”, the major of Tabernas, José Díaz explained.

The festival wants to recognize the work of the companies and professionals that have positioned Tabernas as a natural film setting. In this respect, the ASFAAN Award (Andalusian Film Festival Association Award) will be awarded to the location manager Joaquín “Tate” Fernández, from Almeria. “He has broader experience as location manager. He is very knowledgeable about the corners of this province, he has an outgoing personality that has leaded him to do assistance and production management works. Tate belongs to the third generation of the Fernández brothers, also known as “taxistas-localizadores” (taxi drivers-location managers), who resolved more than one conflict in the fifties and the sixties, what allowed the filmings passed with the minimum of incidents”, José Díaz pointed out.

The AWFF 2019 has completed the cinematographic offer with some parallel activities, such as the presentation of “Duelo al sol” by Manuel Marsol, an art book inspired in “spaguetti western” and drawn using cinemascope and technicolor; and “Sin dólares no hay ataúdes” by Rafael de España Renedo, who analyzes fifty examples of Mediterranean western and shows the characteristics, the audiovisual solutions and the genre’s restructuring from an iconoclast perspective that achieved to connect with the young public between 1964 and 1978.

In order to highlight the importance of western productions, the AWFF will host a round table directed by the journalist Javier Tolentino from Radio Nacional de España. It will be made up of Rafael Maluenda, Gonzalo Bendala, Emanuele Gerosa, Cristina Serena and Rafael de España. The debate will be broadcasted for RNE Radio 3 in a especial program of “El séptimo vicio”, which is a film promoter as a support for expression and knowledge. Tolentino is one of the most recognized journalists that carries out his work in festivals like Cannes, Venice, Berlin or San Sebastian, and will be for the first time in the film festival of Tabernas.

In this edition, the exhibition hall “La Serrata” and the Municipal Theatre will be the venues for the following exhibitions: “La Linterna mágica”, by the photographer Manuel Falces, that shows 57 photos with the cinema and the filmings in the province as protagonists; and “Por un puñado de óleos”, by the painter José Luis Colalillo, who reflects different western scenes and dry landscapes of the Tabernas desert using an impressionist painting technique.

Presentation if the literary works:

The AWFF includes other activities that involve Tabernas inhabitants, such as the big opening parade, street entertainment, the 6th western tapas route or the Western Window Display Contest. Western lovers of all ages and tourists in general will find a themed leisure offer that includes iniciatives such as the Characterization Contest or concerts, where this year we can highlight the performance of Sarah Vista, a Londoner singer who loves Tabernas and will perform the last songs of her album, characterized by country and western styles; the soundtrack concert of the “San Indalecio de la Cañada” musical group; and the country group “Chisum Cattle Co”, which comes back to the festival after its participation in 2017. The AWWF reconnects with the educational community of the province with a new edition of the Drawing Contest, the Short Story Contest and the Mini Chef Contest.

In order to facilitate audience’s attendance, the City Council of Tabernas will once again provide a free transport service from the capital of the province to the town of Tabernas, including stops at the villages Oasys MiniHollywood and Fort Bravo Texas Hollywood during the days in which activities will take place there. Jose Díaz gave thanks for all the support received from the governments of Andalucia and Almeria, as well as from private companies that demonstrated their commitment to the Almeria Western Film Festival, in order to continue growing and strengthening as the great international western film festival, attracting the film industry and promoting the tourism not only in Tabernas, but in all the province.

The deputy of Culture and Cinema, Manuel Guzmán, has stated the weight of the festival nowadays and that it complies with “four basic objectives: it adds value to the film inheritance of the province and Tabernas; it announces the evolution of this genre; it creates a playful and intercultural event; and it promotes, as it couldn’t be any other way, the province as a destination for filmings”. Guzmán has also pointed out the commitment of the government to the festival from its inception and the strategic line on audiovisual industry drawn by the Government of Almeria: “One of the first decisions taken by the president was the new designation of the culture council, in which cinema has special prominence. Almeria is a land of cinema and the support given by the government of Almeria to this important industry is obvious, as well as the support to promote filmings in the province and to create audiovisual works and festivals like this”.

The delegate of the Government of Andalucia in Almeria, Maribel Sánchez, has stated that the new Government of Andalucia, in particular the Councils of Culture, Heritage and Tourism, “will continue promoting and supporting this festival that reinforces the role of Almeria as a setting for different films, but also as a destination for the film tourism”.

In addition, Sánchez Torregrosa has remarked the importance of institutional collaboration ‒in this case, the City Council of Tabernas, the Government of Almeria and the Government of Andalucia‒ in a festival that celebrates nine editions, “so that the projection of the film industry in Almeria can go ahead”. She has also highlighted the weight of Almeria in the Andalusian Film Commission in reference to the total amount of works filmed in the community during 2018: a total of 1,447 works, which means an increase of 2.92% over the previous year, and has generated 130 million euros.

The director of Communication of Grupo Playa Senator, Marta Galdo, has explained the bet made to preserve the film legacy in a unique place: “José María Rosell chose to keep film memory alive creating Oasys Mnihollywood, in which we take care of every detail to offer a unique experience to all the visitors all the year round”.

The Almería Western Film Festival has as main objectives the spread and promotion of western genre cinematographic works, in its broadest concept, which contributes to the knowledge of world cinematography. Its main fonctions are promoting the production of international films in Tabernas and its surroundings, as well as to promote the touristic activity. #AWFF19 will take place from October 10th to the 13th 2019 in Tabernas and the western villages Oasys MiniHollywood y Fort Bravo Texas Hollywood. Promoted by the City Council of Tabernas, and supported by the Government of Andalucia and the Goverment of Almeria. For the third consecutive edition, Senator Hotels & Resorts renews its commitment to the festival and it is the gold sponsor in 2019.