The revitalization of the genre, human rights and entertainment are the highlights of the seventh edition of the AWFF. 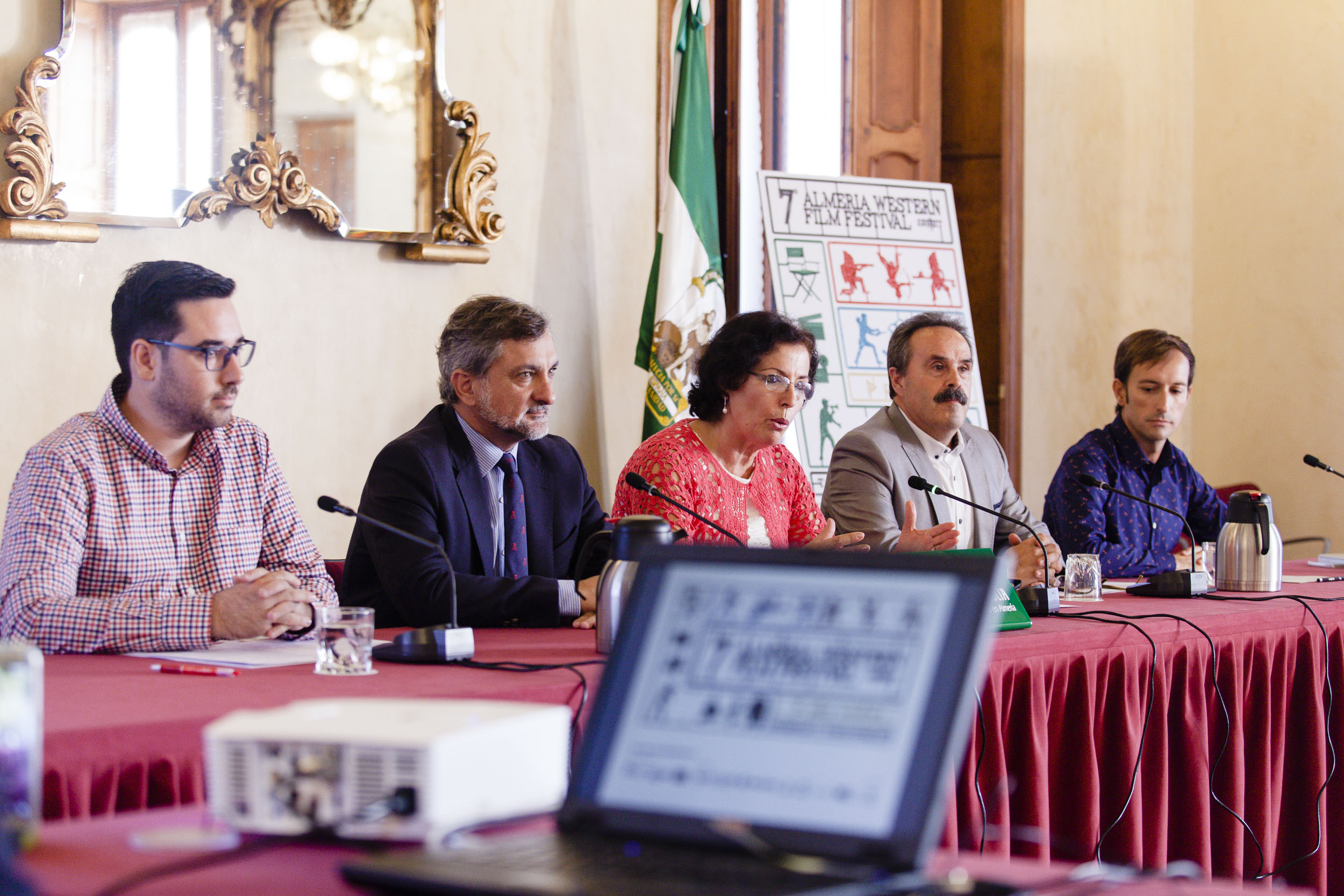 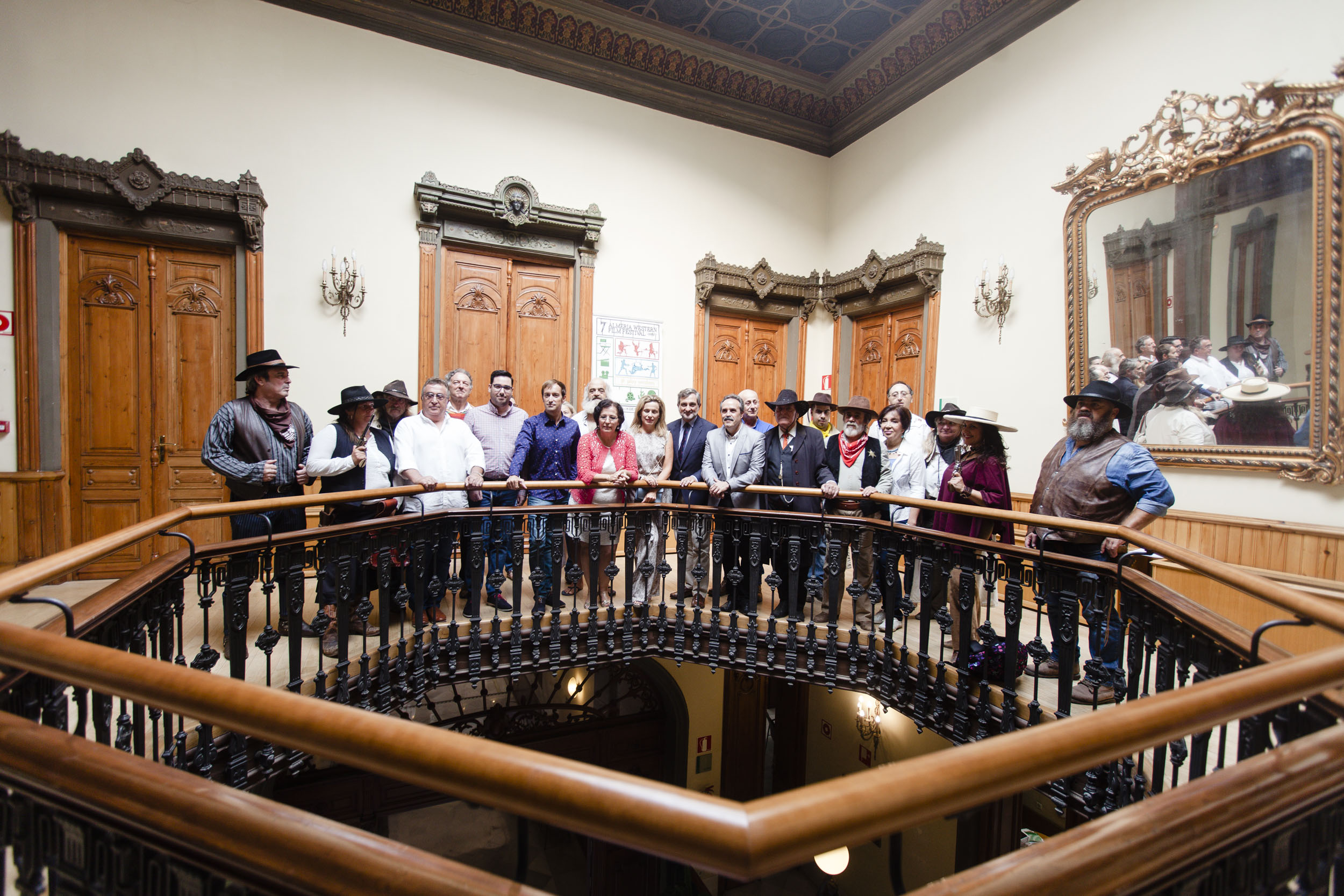 Almeria, September 15th, 2017- For its seventh edition, The Almeria Western Film Festival (AWFF) has chosen as its mission to defend the importance of human rights –specifically the role of women-, the revitalization of the genre, and entertainment. From October 11th to the 14th, in Tabernas and the Western villages of Fort Bravo Texas Hollywood and Oasys Mini Hollywood more than fifty activities will take place, among which include the screening of eight feature films from the Official Section and 22 international short films from more than eleven countries spanning three continents.

Today, the program for the next edition has been presented in the office of the Government of Andalusia in Almeria, with the participation of the mayor of Tabernas, José Díaz, the festival’s director, Juan Francisco Viruega, the Government delegate for tourism, Alfredo Valdivia, the second vice president of the Provincial Government of Almeria, Ángel Escobar, and the Government delegate Gracia Fernández. During four days, Western enthusiasts and visitors will enjoy more than a hundred cultural and recreational activities, including one day that will highlight the “log line” of this edition: PLAY WESTERN.

“On one hand, we want to protect the importance of human rights in the Western genre, specifically the role of women and the search for equality between genders. This goal will be reflected in both the selection of works for competition and the panel of judges, as well as the objectives of the educational activities. Furthermore, we want to honor the filmmakers, actresses and actors from our country who worked in the Italian-Spanish co-productions which were filmed in Tabernas and other places in the province during the sixties and seventies. On the other hand, and following the “log line” of this edition PLAY WESTERN, we have worked to increase the recreational activities directed towards visitors of all ages. We want to invite them to enjoy a cinematographic experience for a few days through training and entertainment” explains Juan Francisco Viruega.

In the sections taking part in the official competition, the Festival has registered a 60% growth in the number of works submitted for participation. For the sample, film productions highlighting the revitalization of the genre have been selected. These productions originate from eleven countries across the globe and some of them are being released for the first time in Europe.

Official list of films competing for the Judge’s Prize and Audience Award:

“Again, we tried to create a balanced program, with representation from several countries. The titles that make up the Official Feature Film Section are an example of the revitalization of the genre, including movies with a historical setting filmed in a postmodern language, or modern films which are built on the classic western narrative and themes” explains Viruega.

The Panel of Judges for the Official Section will be headed by director, screenwriter and film analyst, Fernando Méndez-Leite, who was the director of the Instituto de la Cinematografía y de las Artes Audiovisuales (ICAA). He will be accompanied by four other professionals, each of whom come from different areas of the film industry. The film editor, winner of two Goya Awards, Iván Aledo; the screenwriter and director from Granada, Chus Gutiérrez; the screenwriter, director and producer from Almeria, Manuel Martín Cuenca; and the director of photography, David Carretero Blake. In addition, there is a professional panel of judges for the Official Section of short films and film school submissions, as well as for the RTVA prize to the Best Creation of Andalusia.

The Official Section of international short films is composed by 22 European and American works about fiction, live action, documentary and animation.

For the second consecutive year, the festival will award the RTVA Prize to the Best Audiovisual Western Creation in Andalusia. In this section, six films from the provinces of Almeria, Malaga, Cadiz, Huelva and Sevilla have been selected. Additionally, in the film school category, four films coming from centers of Almeria and Madrid will compete.

“El precio de un hombre” (The Price of a Man), which celebrates its 50th anniversary, will be the festival’s honorary film. The film was directed by Eugenio Martín, from Granada, who is the “godfather” of this seventh edition. “Eugenio filmed part of these scenes in Tabernas, and thanks to this film, won the Union Award for Best Film and Best Director, becoming the first western to receive this type of recognition in Spain. In addition, this film stars the Cuban actor, Tomás Milian, to whom we will award the Leone in Memoriam Prize” explains Viruega.

The actress from Granada, Elisa Montés, will receive the “ASFAAN Award” for this edition. She portrayed the role of a Mexican woman in numerous Westerns, sharing the leading role with famous actors such as Franco Nero, Lee Van Cleef or Yul Brynner. In addition, two “Tabernas de Cine” prizes will be awarded in each of the western villages participating in the festival. The two actors who will be honored are the Italian Alberto Dell’Acqua, who filmed several western films in Almeria in the sixties –we will pay tribute to him with the showing of the film “Adiós, Texas” by Fernando Baldi which celebrates the 50th anniversary of its premiere and whose leading actors are Franco Nero and Elisa Montés- and the actor George Martin, who was the absolute protagonist in the legendary western films at the end of the sixties.

The AWFF will complete its film show with a series of original, cultural and recreational activities for everyone. “The festival will start with a great western parade, which will draw upon the participation of almost the whole town of Tabernas. Once again, we have organized a Drawing and Story Contest, now in its third edition. In addition, art will be displayed in two exhibitions, the Western Genre Visual Arts exhibition and the thematic Madelmans exhibition” explains the mayor of Tabernas, José Díaz.

The festival will also include a round table on human rights, a workshop led by director and screenwriter Oliver Laxe, where the students will work with the iconography of the Tabernas Desert, and the presentation of the books: “Eastwood: desde que mi nombre me defiende”, by Francisco Reyero, and “El héroetrágicoen el western”, by Fran Benavente. << Music will be the protagonist, within the genre, in different modalities such as country or rock. Among the bands performing will be the American band Spindrift, who will start their European tour at the festival” says Díaz.

Some other novelties in this seventh edition of the AWFF are the Mini Chef Western cook-off for children and the music and dance performance by the Daganzo de Arriba dance school (Madrid) which will include a demonstration of can-can. As in previous years, a contest of western “tapas” will be celebrated in the restaurants in the town, from September 22nd to October 13th. The town council of Tabernas will provide free bus services from the capital to the town, from October 12th to the 14th, including connections with the surrounding western villages of Fort Bravo Texas Hollywood and Oasys Mini Hollywood during the days when activities are being celebrated there to facilitate public attendance.

The Government of Almeria, in its commitment to promote the film industry within the province and to make “the Coast of Almeria” a reference point for shooting destinations, continues to be one of the best allies to the city council of Tabernas in the promotion and diffusion of the Almeria Western Film Festival.

The second vice president of the Government of the Province, Ángel Escobar, has reiterated the province’s support of the festival: “The Almeria Western Film Festival has grown exponentially throughout its history, becoming a palpable example of the great potential of the film industry in Almeria. A calling card that together with our International Film Festival and the filming office in Almeria are enhancing the reputation of Almeria as the Land of Cinema”

This time, the Tourism and Sport Council allocates approximately 60,000 € for the organization and dissemination of the seventh edition of this cultural event, which reinforces the promotion of Almeria as a perfect setting for different types of filming and also as a film tourism destination. “From the Junta de Andalusia (Government of Andalusia) we will continue promoting the synergy between cinema and tourism. We will do this in collaboration with other institutions like the Provincial Government of Almeria, the city councils, or entities like the Andalusian Film Commission or forums such as Mesa del Cine, supported by the University of Almeria” explains Gracia Fernández.

Furthermore, the Government of Andalusia promotes the “Ley del Cine” (Cinema Law), a rule, which is in the final stages of its proceedings, and which will arrive in Parliament in autumn. “It’s a first-rate legislative Project, an innovative law that will become a reference point in Spain and will promote the continuous modernization and productive, sustainable growth of the film industry in Andalusia as a part of our social development. Among its objectives are to foster the development of the audiovisual industry of Andalusia and to promote filming in our region, as well as the activities of the peripheral industries and the services linked to them that create wealth and employment” says Fernández.

On his behalf, the tourism delegate for the Government of Andalusia in Almeria, Alfredo Valdivia, has emphasized the support given to the Festival. “We have organized a specialized “famtrip” of press that will highlight the different locations in Tabernas, and will also promote the region of Almeria” declares Valdivia.

Tabernas City Council is the main driving force behind this Festival, which after six consecutive years has transformed into one of the biggest events for tourism and film diffusion not only in this town but in the entire province. The event, which relies on the support of the Governments of Almeria and Andalusia, has as its main objective to promote the town of Tabernas and its surroundings as a natural setting for filming in the national and international film industry. In this edition, Senator Hotels & Resorts and Škoda are the platinum sponsors of the Festival.